The Pacific Coast Highway (PCH) of the United States, also known as US-101, runs from Seattle, WA to San Diego, CA. The route is popular among both road-trippers and bicycle tourists due to its beautiful landscapes and vibrant cities. Bicycle touring the Pacific Coast Highway is a bucket list item for many bicycle travelers. The scenery is legendary and includes about every ecosystem you can think of – rain forests, tide pools, rocky coastline, and harsh deserts in southern California.

We rode a portion of the Pacific Coast Highway – Seattle to Redwoods National Park – in May of 2021. We opted to ride the Olympic Discovery Trail rather than US-101 on the Olympic Peninsula and took some detours from the main highway along the Oregon Coast. We had a fantastic time along the coast and appreciated the cycling infrastructure available along the route.

Download the GPX track of our route down the Pacific Coast.

It is best to ride the PCH from north to south because you’ll have a better view of the coast, and the shoulders going in this direction are more generous. This is the direction recommended by cycle tourism groups, and in some places the highway developers have actually designed the road to have larger shoulders to accommodate north-south bicycle tourists.

The ODT is a 135-mile multi-use trail that runs between Port Townsend and La Push. We didn’t go all the way to La Push, but we rode the majority of the trail and were blow away by the scenery and quality of the route. A significant portion of the ODT is on bikes/pedestrians-only paths and the rest is on pleasant, low traffic roads.

In general, it doesn’t get much better than a bike path, and when that bike path winds through fairy-tale moss forests full of creaky old growth trees, we’re pretty much in heaven. We also got to ride a recently completed section of trail along Crescent Lake, which was wonderful.

There are numerous state and county park campgrounds to choose from along the route, most of which have hiker/biker sites that you don’t need to reserve in advance. Since we were in a group we chose not to wild camp, though it would be possible if you’re discreet. The coastal areas of the PNW are fairly developed and there isn’t a ton of public land, so choose your spots wisely.

After riding the Olympic Peninsula, we headed south along the Pacific Coast Highway. The traffic was intense at times, but overall it wasn’t as bad as we expected. Especially along the Oregon Coast, there are frequent detours to take from the main road. This cycling guide for the Oregon Coast is a great resource put together by the Oregon Department of Transportation. It maps out all the detours from US-101 and labels hiker/biker campsites and other amenities.

The scenery along the coast is stunning and well worth dealing with the cars…and the logging trucks. Drivers in this area seemed accustomed to sharing the road with cyclists and were usually courteous, and most sections of the road have a decent shoulder.

The coastline is rugged and rocky, with tall formations jutting out of the sea not far from the shore. The Oregon coast is a fantastic area to explore tide pools and the colorful life forms that inhabit them. We found a great spot in Yachats to park our bikes and walk around the coast during low tide. We saw starfish, anemones, barnacles, urchins, and lots more.

We continued to stay in state and county parks along the PCH, most of which had hiker/biker sites. Keep in mind that Forest Service campgrounds often do NOT have this option and could be full during high season, so plan accordingly.

We went as far south as Redwoods National Park, where we took a rest day and hiked to Fern Canyon. After exploring the redwoods, we turned east via Bald Hills Road and connected to Klamath Falls to start the Oregon Outback bikepacking route.

Accommodation on the Pacific Coast Highway

We mostly camped in state and county campgrounds, which ranged from $18-$22 per night as of 2021. We stayed in a couple of hiker/biker campsites, but since there were three of us it was usually cheaper to just pay for a full site. The campsites were pretty frequent along the route, though we sometimes had to go a couple miles off the road to reach them.

We stayed in hotels when we wanted a break from camping or were going through a cool town we wanted to explore. We also stayed with a couple different Warmshowers hosts, which was a fantastic experience. On one occasion, our extremely kind and trusting hosts left us with chicken enchiladas and margaritas while they went on a dinner date with some friends. Good people do exist in this world.

Grocery stores are plentiful along the Pacific Coast, and we usually only carried one day’s worth of food at a time. Sometimes we had to resupply at small convenience stores, but they usually had everything we needed. We had a weak spot for drive-through espresso shops and would frequent those when we needed an energy boost. We filled up water from campgrounds or convenience store soda fountains.

Bicycle touring the Pacific Coast Highway is an incredible way to experience the scenery of the west coast. The traffic can sometimes be challenging, but there are plentiful detours from the main road that enable you to have a respite from the vehicle noise. The scenery is spectacular and well worth sharing the road. We definitely want to return at some point to ride further south! 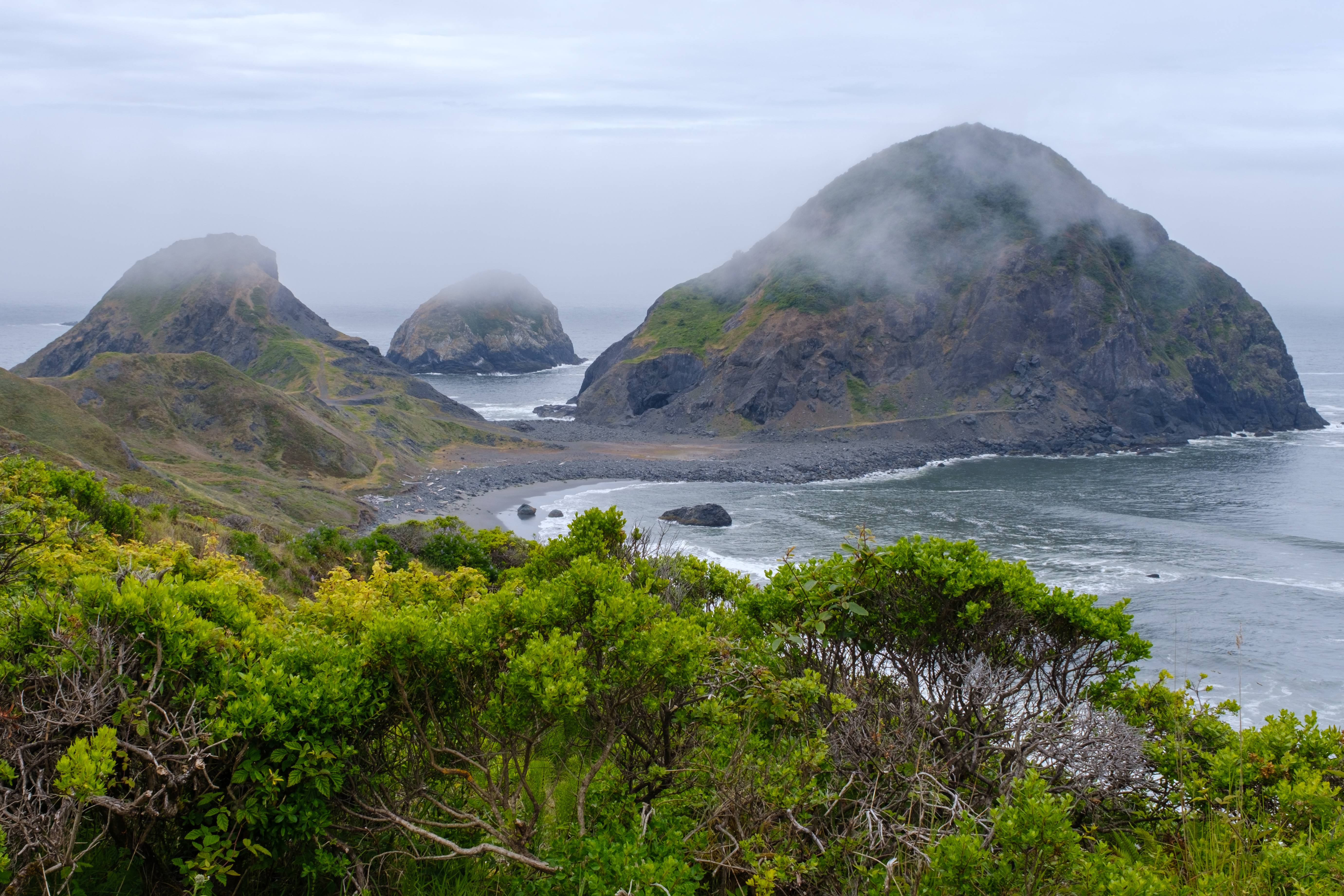